From the beginning: Selby family traces roots to company’s inception

As an Eastman fifth-generation employee, Mark Selby is aware of those in his family who came before him — starting circa 1920 with his great, great, grand uncle John Ray Bishop. According to Selby family history, John Ray used a team of horses to help excavate the land for construction of Eastman’s original buildings in Kingsport, Tenn.

From Eastman’s beginning, Mark — a reliability management facilitator in CESP — has had a relative employed at the Kingsport plant. His earliest memories of the company feature his father, Joseph P.L. “Joe” Selby, an electrician who worked from 1960 to 1998, and the Eastman steam whistle. 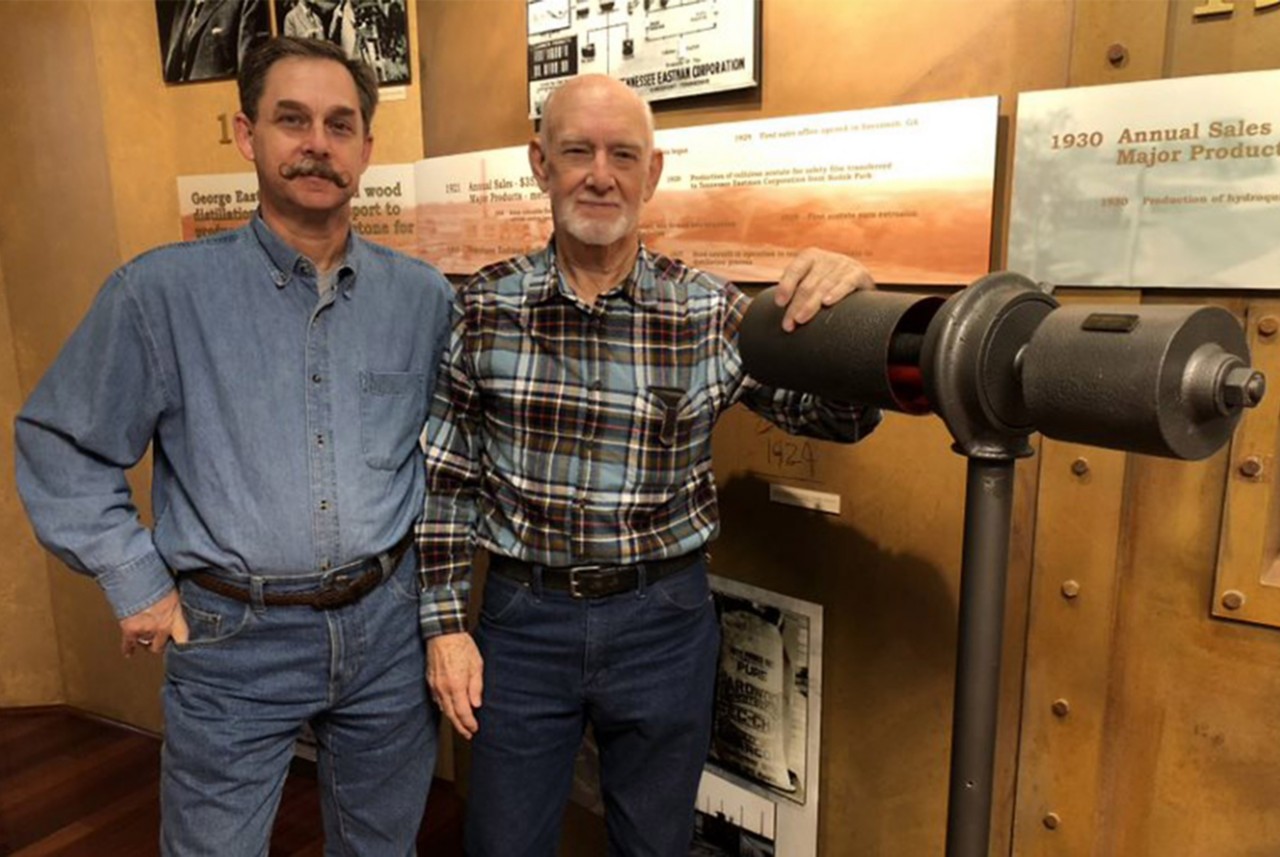 “I can remember being out in our driveway. We could hear the whistle blowing at dinnertime. The old steam whistle. I always thought that was pretty cool because I knew daddy was at work,” Mark recalls. “I was big enough at that time to know that a plant was down here. I was 5 years old. Daddy put in a lot of hours here. A lot of times, I'd already be in bed by the time he’d get home, and then he’d have to leave in the morning before I got up and going, but I never thought anything about it. That’s just the way it was. He was providing for the family.”

Joe’s earliest memories of the company include his father, Joseph W. Selby, who worked from 1933 to 1976 in Acid Division.

“He was an instrument foreman,” Joe explains. “Most of the instrumentation at that time was pneumatic. He supervised a group of men that were called the instrument group. They were in S&M division. I know he worked in the yarn plant before that as a yarn handler, when he first started. And then he went to Holston Ordinance, during the war, I believe.” Joe spent four years in the U.S. Air Force after high school and was 22 years old in 1960 when Eastman hired him on a cleanup crew in the mixer room.

As his father did with him, Joe recalls taking his children to Horse Krickers, a free Saturday morning tradition in Building 89 for children of employees. Horse Krickers, started by Bob Delius, featured popcorn, movies and roller skating. He also has fond memories of the company’s Christmas parties and Sunday lunches.

"You’d come into the gate and show your pass and bring your family in [to Building 89] and have lunch, and it was this pretty good treat,” he says.

Joe worked on cleanup for a year before being accepted into the company’s apprentice program as an electrician. After four years in that program, he was transferred to the electronic shop. He eventually became a control system technician.

Joe’s four years of military duty took him to Virginia, Colorado, Florida and Maryland, and when his commitment was up, he returned to Kingsport.

“I got out of the military and put in an application at Mead, the Press and Eastman. Eastman called me first. I came back here because it's God's country,” he explains. “All my family is here. I like it here. I like it so well I don't like to go anywhere else.

“Eastman was really good to me. I needed a job and, apparently, they wanted me to work,” Joe says. “They treated me well, Eastman did, and I tried my best to treat them well and do what the job called for. I would recommend Eastman. I do recommend Eastman. I know things have changed a lot, but that’s just part of life. … It’s a good place to work. Eastman saw to it that I was able to raise a family and not go hungry or cold or anything like that for 37 years. And they've done the same thing for the last 22 years and I've been retired.”

Mark Selby earned a degree in leadership communications from East Tennessee State University. It was about three years after his graduation before there was a job opportunity for him at Eastman.

“When I came to interview here, Bill Parham looked over my records and he said, ‘You know, you went to school. You did pretty good. Why would you want to come work for Eastman?’ And I said, ‘Well, I always thought that was what you did. You went to school and you went to work for Eastman.’ I told him that I would do anything and that is what I wound up doing. I started out digging ditches, working on the underground crew,” Mark says.

Mark says he’s proud of his family’s history at Eastman.

“I'm proud to be able to say that I'm a part of that. I’m grateful to those who went before me and paved the way, set a good example. I’m grateful for their sacrifices. I never had to want for anything,” he says.

Mark Selby’s great, great grandfather Henry Clinton Bishop joined Eastman in 1920 as employee #455. He was the Stores manager until his retirement in 1941. His great, great, grand uncle John Ray Bishop was also employed circa 1920 as a contractor for Ridge Construction Co., which was owned and operated by Eastman. Also employed at Eastman during the early years were W.T. Bishop, Carl Bishop (employee #5373) and Oscar Bishop (employee #3165). Carl and Oscar were brothers; W.T. was their cousin. All three are distant cousins of Mark.

Great grandmother Myrtle Ann Bishop Miller came to Eastman circa 1920, working in Payroll where she wrote employee checks by hand. Her husband, Mark’s great grandfather Patrick H.A. Miller (employee #1609), joined the company in 1921, working in Purchasing and retiring in 1955.

Mark’s grand uncle Charles B. Williams served Eastman for 33 years, from 1931 to 1964. He was superintendent of Power and Services. Mark’s maternal grandfather, John Knox King (employee #1797), worked here from 1932 to 1972. His paternal grandfather Joseph W. Selby served from 1933 to 1976 in Acid Division. Grandmother Vivian Miller Selby worked in the yarn plant for five years, retiring in 1938 to raise a family. Great grand uncle John Wesley Bishop was employed from 1934 to 1978.

Grand uncle Patrick H.A. Miller worked for 46 years, from 1939 to 1985, although he had a break in service during college and World War II. Grand aunt Mildred (Sankie) Miller Boyd worked four years as a winding supervisor in the yarn plant, from 1934 to 1938. Grand aunt Mildred Greenway Miller was a dietitian who worked from 1944 to 1946, then again from 1971 to 1985. Grand aunt Janie King Davenport worked in the yarn plant; her exact years of service are unknown.