“Well, anyway, what was the real reason that Eastman decided to come here? It has been said, too often I think, that the scarcity of wood alcohol during World War I was the reason. Was it? I think not! At least not the important one … Looking back, I am convinced that they more and more came to the conclusion that a plant here — where the people roundabout were sincere, capable and shall we say, just old-fashioned, good folks— possessed the fundamental elements of a good location.” — Perley Wilcox, Eastman president, speaking at the company’s 25th anniversary dinner.

Eastman’s culture — the unique values and behaviors that created the personality of the company — was born early. Defined by Merriam-Webster as “the set of shared attitudes, values, goals, and practices that characterizes an institution or organization,” culture today means different things to different people. It includes how we work with each other; how we watch out for each other; how we earn customers’ business; how we create an inclusive global culture; how we are good stewards of our company, environment, and world; and how we are trustworthy.

From the company’s early days, it seems clear that the “pioneering spirit” of its first employees laid the foundation for future generations, as Wilcox explained at the company’s 25-year anniversary dinner:

“Now, again, let’s see what factors led the company to come here. Is it not reasonable and probably true that the character and excellence of the people in this vicinity was No. 1? The prospects that Kingsport would be a good place in which to live and develop a business, No. 2? And this region being in a progressive section of the South with good river water and railroad facilities, No. 3? And lastly, there is much evidence pointing to the likelihood that a pioneering spirit prevailed among us, and we just wanted to see what we could do if we had elbow room.” 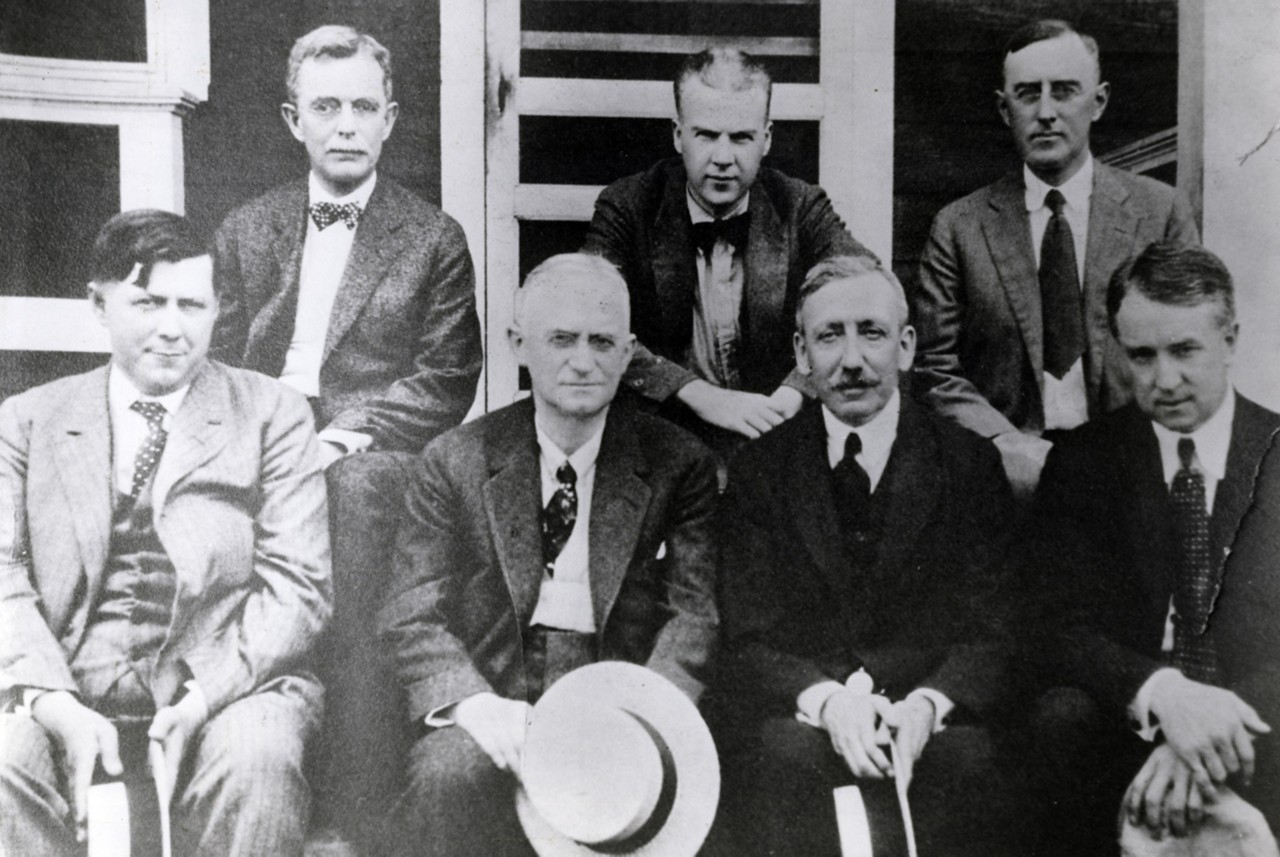 One of those pioneers was Ambers John “AJ” Clonce Sr. “When I came to work at Eastman [on October 26, 1920], there wasn’t much Eastman,” he told the TEC news before his death in 1996. “Almost all the work was labor — cleaning up, building roads and things like that.”

In 1920, Clonce and his bride, Elsie, lived on Long Island — close enough that he walked to work. But on occasion, he hopped on his horse for a ride to the plant. Horseback hasn’t been the only unusual form of transportation to the company’s Kingsport headquarters over the years. In the spirit of a prevalent “can-do” attitude across the company, other team members have traveled to work by canoe or bicycle or have hitchhiked.

Lanny Joe Bright started here in 1969 after hitchhiking to town to complete a job application. Today, he’s a group leader for steam services in the utilities division. “I needed a good steady job just getting out of high school,” Bright says. “Eastman gave me a chance to prove my work ethic.” Bright is forever grateful that Eastman managers helped him work out the details of commuting back and forth to work.

When Bright thinks about the culture of the company, he remembers growing up with neighbors who worked at Eastman and believing that those neighbors had an easier time making a living than folks who worked elsewhere. Like many team members, Bright had relatives who found jobs at Eastman — an uncle and cousin both retired now; his youngest son currently a system operator in utilities.

John B. Dennis, a financier who is credited as the creator of modern Kingsport, shared Bright’s cultural sentiments in a letter he wrote to George Eastman dated January 1, 1932:

"As I have so often said and love to repeat, as I go about your plant, around town and out into the suburbs and meet so many people whose lives have been made more useful and happier through the ways you have opened to them here, the thought comes to me so often I wish I knew some way of making you understand how grateful we should be and are to you for it all."

Connie Brown, a 1st operator with CESP who joined Eastman in 1970, says the culture concerning women has changed drastically during her nearly 50-year career here. “We were secretaries or worked in the yarn plant. I was loaned out in 1971 or ‘72 to polymers, and they didn’t even have bathrooms or locker rooms for women,” she says.

Brown’s career plans didn’t go exactly as she intended, but she might say it worked out better than she expected. “I probably couldn’t have found a better paying job with no college. I just planned to work for a few years and raise a family. But it didn’t work out that way. I was proud to make my own way,” she says. 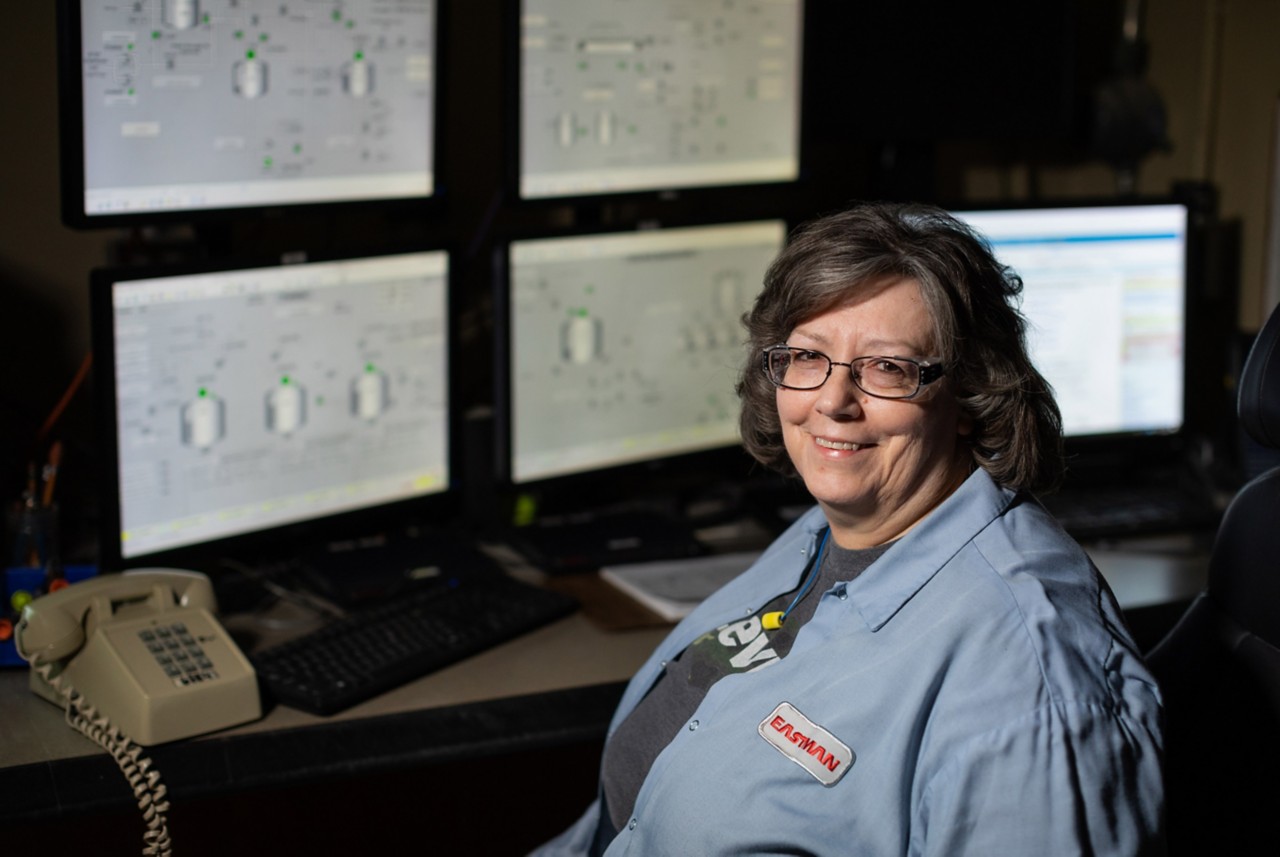 The collaborative, can-do spirit demonstrated by the Eastman team almost seems second nature. When Hurricane Harvey made landfall in Texas and Louisiana in August 2017, the Eastman team did what they did best — they rolled up their sleeves and got to work. Because the Texas City facility fared well with minimal issues, the focus shifted to the impact of the flooding on employees’ families and their homes. Through a donation match established by the Eastman Foundation, more than 600 employees representing all levels of the organization donated $71,500 toward relief efforts for impacted Eastman families. Additionally, members of Eastman’s Board of Directors were moved by the company’s response and donated personally to Eastman’s relief efforts. Eastman and the Eastman Foundation also provided temporary housing, portable storage units, rental cars, clothing, bedding and other useful items to impacted team members and their families.

Just two months later, disaster struck again, this time in Kingsport. And once again, the Eastman team stepped up. On October 14, 2017, as the Kingsport site recovered from an explosion in its coal gas operations, the Texas Operations team provided a meal to the Kingsport team consisting of crawfish etouffee, dirty rice and other Cajun specialties from the Longview, Texas, community.

“It meant a lot to everyone here,” Kevin McGuire, director of gasification in Kingsport, said at the time. “It was an incredible gesture that reminded us all that they’re behind us — that we’re all in this together.”

Texas Operations provided more than just lunch to their Kingsport counterparts. A group of mechanics and welders from Texas Operations arrived here to help with the rebuilding process.

“I can’t conceive of any man having a more loyal and affectionate employee than you have in Mr. Wilcox. Every time I go out to his plant, I yearn for you to be here and see what they are doing and how well they are doing it. Of course, I don’t know much about such things, but there is a certain atmosphere about an industry that you can’t escape, particularly in the consecration of men to their tasks. I have never seen any better anywhere than in your plant here, and I can’t be honest and not say it is the best I have ever seen.”